If you drive by, things look kinda quiet at The Group Rep’s NoHo complex.

But inside, outside, and virtually, we have been very busy.

In March we were rehearsing and preparing to open two productions: Neil Simon’s LONDON SUITE and MITCH ALBOM’S TUESDAYS WITH MORRIE. We have continued to rehearse the Neil Simon play via Zoom.

We have gone ahead and captured TUESDAYS WITH MORRIE on video. And we are presenting our very first virtual run!  Yes, the Pay-Per-View of a Staged Production begins August 14 and virtually runs through August 30th. Weekend passes are available on our website. Our own Flint Esquerra directed this last year at Sierra Madre Playhouse with Larry Eisenberg as Morrie. They’re both back joined by our own TJ McNeill for a truly remarkable production.

Thanks to our ingenious co-producer, Emmy-nominated Gina Yates, we have arranged a LIVE talk-back with the author, Mitch Albom on Tuesday, August 18th.

We recently received a grant from the Los Angeles Department of Cultural Affairs. They challenged us to express ourselves creatively in a medium we hadn’t tried before. So, we produced HALLWAYS: STORIES FROM JUVIE. This is a multi-media project that was entirely created in quarantine. Inspired by our Group Rep Board member, Heidi Mendez Harrison, this is a collage of stories written by teenagers in lock-up. Heidi was a volunteer at a Youth Detention Center in Utah for two years and asked the kids there to write their stories. And their response was, “Why? Who will care?” And Heidi said she would care and she would get others to care. So, we assembled a cast, Heidi coached them via FaceTime and they all self-taped. We sent these to Hartley Powers who weaved them all together magically to create this dynamic and moving presentional. HALLWAYS is available 24/7 on our YouTube channel and on our Facebook page.

Our annual festival of ten-minute plays was also in the works when the shelter-in-place order was issued. Undaunted, we narrowed the nearly 300 (international) submissions to 15 and we — as a company — read these plays via Zoom and made the final selection for this year’s NINE WINNING ONE ACTS. We are in the process of securing nine directors and will begin casting soon.

Also, on schedule to be part of our programming Upstairs-at-the-Group is MOTEL 66. This is an evening of one-acts and a tribute to our founding Artistic Director, Lonny Chapman. These plays, written by our members and developed in our playwrights unit are all set in the motel courtyard along Route 66. The writers select the year and the city. We are currently reading these plays weekly via Zoom and look forward to allowing our audiences to “get their kicks on Route 66.”

The set for LONDON SUITE is nearing completion. Once we receive our County Safety Protocols and green light, we plan to open LONDON SUITE. We will offer “in theatre” tickets as well as “live stream” tickets.

I’m sure you know the face — and voice — of Marvin Kaplan. I met Marvin in 1981 when we were both taking a workshop on how to write a musical. Marvin was a series regular on “Alice” (he played Henry the phone guy), but he was also in a slew of classic movies like, ADAM’S RIB, IT’S A MAD, MAD, MAD, MAD WORLD and THE GREAT RACE, as well as hundreds of guest-starring roles on television and voiceover work. Marvin was a friend of Lonny Chapman’s and a supporter of Group Rep. He came to see many of our productions, even in later years in his wheelchair. He passed away a few years ago, but he set up a foundation: The Kaplan-Loring Foundation and they have just given us a modest grant to help develop new plays.

We thank all our supporters and our subscribers for their continued emotional support and financial support through these unprecedented times. We are continuing to be creative and we cannot wait to get back to making LIVE theater again upstairs and downstairs at 10900 Burbank Boulevard. 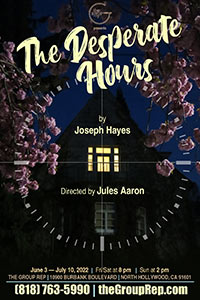