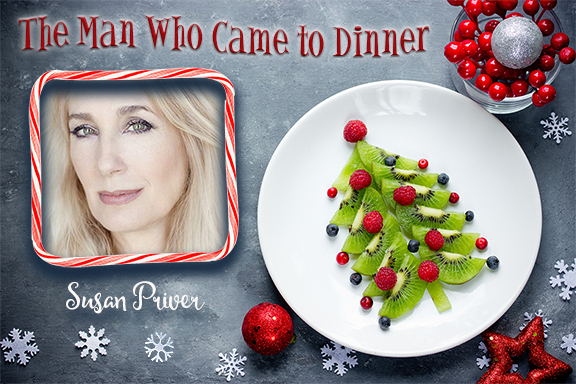 Susan Priver plays Lorraine Sheldon – A snobby, beautiful actress. Based on Gertrude Lawrence. She is the vicious epitome of the glamorous, acid-tongued, superficial superstar. She is busy trying to get Lord Cedric Bottomly to marry her (she wants to be high society).

SUSAN PRIVER (Lorraine): Most recent forays in the theater have been at Theater 40, in Terrance Rattigan’s Separate Tables, directed by Jules Aaron, and Engaging Shaw, directed by Melanie McQueen. In 2016, Susan had the great opportunity to play Tennessee William’s down on her luck showgirl, Myrtle, in Kingdom of Earth, here at the Odyssey Theatre, directed by Michael Arabian. Other theater credits include: Ferenc Molnar’s The Guardsman, directed by Lillian Groag, of South Coast Rep., Diary of Anne Frank, Harold Pinter’s The Lover (LA Weekly Best One-Act) and Pinter’s A Slight Ache, directed by Carol Reis. At the Lillian Theatre: The Great Sebastians, directed by Anthony Caldarella, George Bernard Shaw’s Ceasar and Cleopatra, Idiot’s Delight, and Twentieth Century, directed by Rick Sparks. Also, John Patrick Shanely’s Four Dogs and a Bone, & Savage In Limbo, Edward Albee’s American Dream, David Mamet’s two-character, Reunion (Drama Logue award, performance), Sam Shepard’s Fool for Love, William Inge’s People in
the Wind, & Incident at the Standish Arms, Sidney Kingsely’s Detective Story (Drama Logue Award, Best Revival, Best Ensemble), God of Vengence, and Bertolt Brecht’s The Resistible Rise of Arturo Ui, amongst others. TV and Film: Guest starred on HBO’s Lucky Louie, and Fox’s Space: Above and Beyond. Susan starred in the psychological thriller, Serving Up Richard AKA, The Guest Room, with
Jude Ciccolella of 24 and Ross McCall of White Collar, written and directed by Henry Olek. She wrote and starred in the LGBT festival favorite, What’s Up, Scarlet? with Sally Kirkland, Jere Burns and Musetta Vander. Other indies include leads in, My Brother Jack and Mafioso, and the shorts, Good, and Miss Dixie High. Susan recently filmed the indie feature, Year of the Detectives, and the shorts,
Louis by the Sea, and The Game of Life.