Bring a Friend for FREE during first 2 Weeks of Run.

Make your payment here and call our
RESERVATION LINE at (818) 763-5990
when you are ready to select your dates! 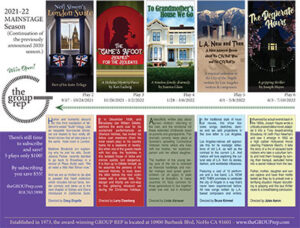 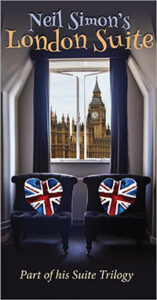 Part of his Suite Trilogy

Humor and humanity abound in this third installation of Mr. Simon’s sweet “Suite” trilogy. Like an exquisite four-course dinner, we are treated to four wildly different stories that all take place in the same hotel room in London. Matthew Broderick (on explaining why he and his wife, Sarah Jessica Parker, recently decided to go back to Broadway in a revival of Plaza Suite) said, “We all need a little Neil Simon now.” And we are so thrilled to be able to present this fresh collection which includes full-out farce, tender comedy and takes us to the next chapter of Sidney and Diana introduced in California Suite. 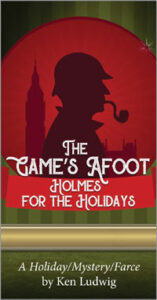 THE GAME’S AFOOT or HOLMES FOR THE HOLIDAYS

It is December 1936, and Broadway star William Gillette, admired the world over for his acclaimed performances as Sherlock Holmes, has invited his fellow cast members (from his most recent play) to his country home for a weekend of revelry. But when one of the guests meets with foul play, the festivities in this isolated house of tricks and mirrors quickly turn dangerous. It is then up to Gillette himself, as he assumes the persona of his beloved Holmes, to track down the killer before the next victim meets with a similar fate. The danger and hilarity are non-stop in this glittering whodunit set during the Christmas holidays. 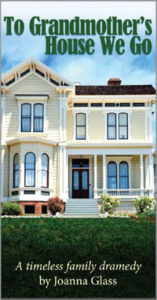 TO GRANDMOTHER’S HOUSE WE GO

A beautifully written play about grown children returning to the nest, and the emotional toll these extended childhoods exact on parents and grandparents. This dramatic comedy takes place at Grandie’s sprawling Connecticut Victorian home where she lives with her brother, her cook/companion and her eldest daughter. The tradition of the young taking care of the old is reversed as financial hardships and marital mishaps lead grown grandchildren (of all ages) to seek recovery at Grandie’s. In many countries it’s fairly common for three generations to live together under one roof, but in America? How long will Grandie’s well-preserved apron strings stretch? 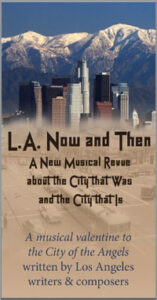 L.A. NOW AND THEN

In the traditional style of musical revues, this show features: songs, sketches, dances and we add projections in this love letter to Los Angeles.

Los Angeles-natives will appreciate this for its nostalgic reflections of old L.A. as well as the contrast to the current L.A. And visitors will love exploring the cultural side of L.A. from its stories, fashion, and worldwide influences.

Featuring a cast of 15 performers and a live band, L.A. NOW AND THEN promises to celebrate the city of Angels in a way that’s never been experienced before. All new songs written by L.A.-based composers and writers. 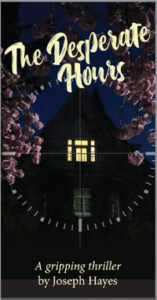